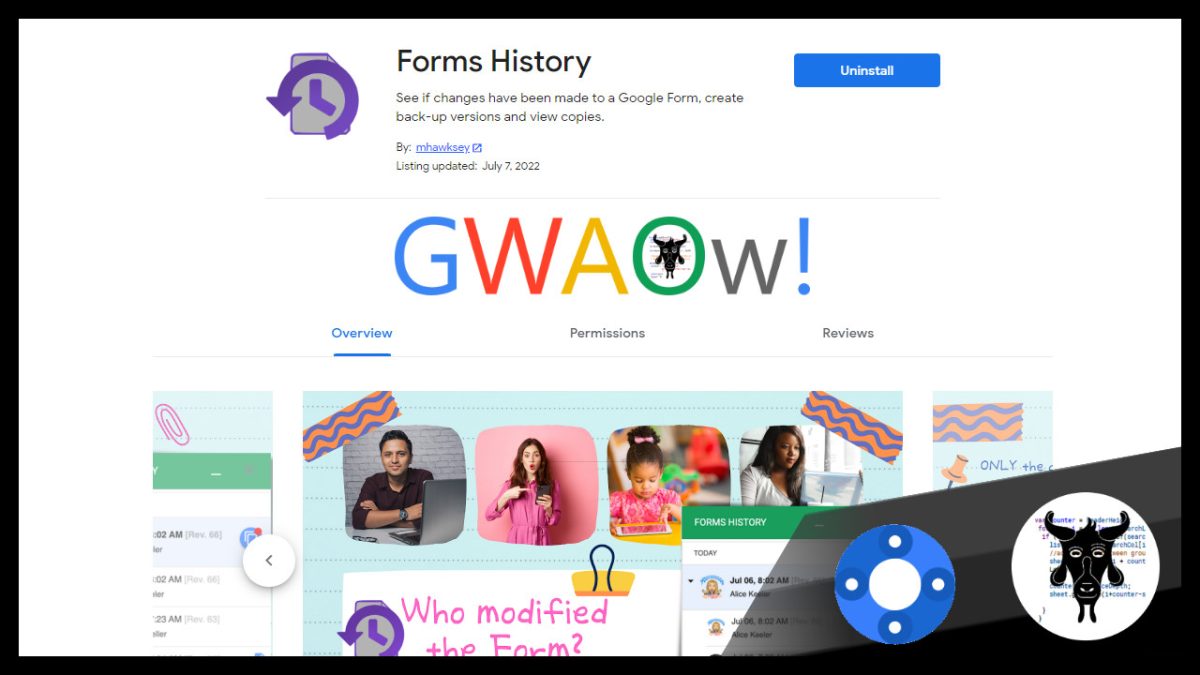 In this episode of GWAOw!!! we look at the Google Workspace add-on, Forms History by Martin Hawksey.

About Forms History for Google Forms

Unlike Google Docs and Google Sheets, there is no version history in Google Forms. Forms History is Martin’s solution to this problem. This free add-on allows you to review the version history of your form and make saves at critical points in your form build process.

This is a must-have tool for teams collaborating on a Google Form.

You don’t need to install Forms History for all users who are collaborating on your form for it to run. The add-on will keep track of your edits and provide opportunities for you to make saved versions of your form along the way.

After installation, simply click the add-on puzzle piece in the top menu of your Google Forms project and then select Forms History > Open. A sidebar will appear indicating daily versions. You can then expand these sections to see breakdowns of activity over the day.

From the sidebar, you can also save a current version or navigate to a version that has been saved previously. Intuitive icons make this process very easy.

There are some limitations to how Google Forms stores updated data for Google Forms and you might find that small edits within around 20 minutes might be consolidated into one version. To be clear this is not a fault of Martin’s add-on it is just how Google Forms handles how it keeps track of different versions.

About Martin Hawksey the developer

Martin is one of the biggest names in the Google Workspace Google Apps Script community and is the mastermind behind the Apps Script aggregate site Apps Script Pulse and host of the long-standing apps script Google workplace YouTube series Totally Unscripted, as well as being a Google recognised Developer Expert and Google Cloud Innovator Champion. This is a fella you can trust which gives me great peace of mind when installing this app.

Check it out on the Google Workspace Marketplace: Forms History

Or learn more from the add-on’s homepage.

You can also see a great interview with Martin on Forms History hosted by Alice Keeler.