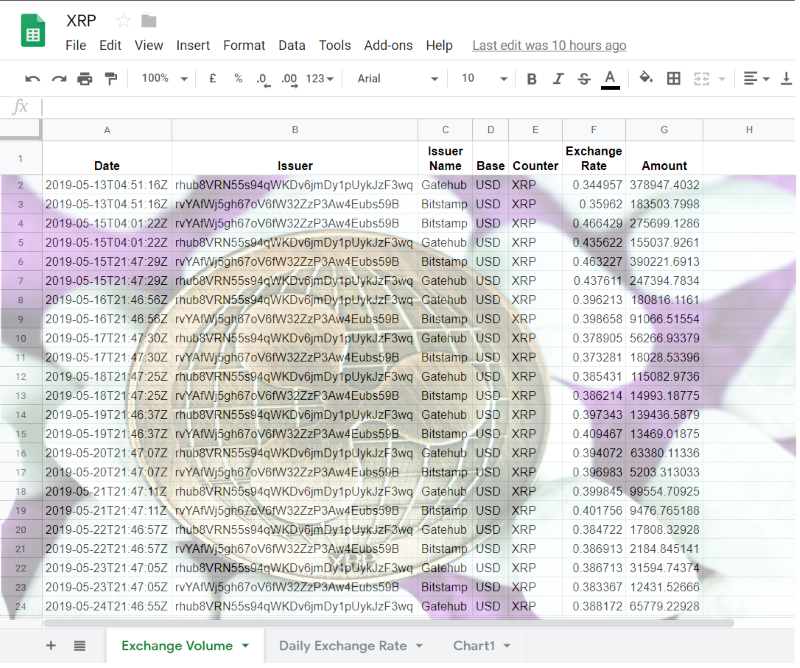 I have been very fortunate of late to have the patronage of the Ripple XRP cryptocurrency community via XRP Tip Bot and Coil. This is no small part due to the support of user Recreational Rex from Twitter.

Full disclosure here, I don’t really know all that much about cryptocurrencies. I knew about Bitcoin and Ethereum but really didn’t really invest any time and money into looking at these growing forms of value exchange.

But now I’m a little curious.

I thought it would be fun to see what the value of XRP was against a fairly standard metric like the USD and keep a record of this exchange rate daily over a month or so (Mrs Yagi just read the ‘fun‘ in the last sentence and rolled her eyes).

I also thought it would be pretty cool to see how many exchange providers (Gateways) that conduct USD-XRP exchanges are around and see if there is much difference their exchange rate day-to-day among them.

Fortunately for me, the XRP Ledger provides a freely available open-source ledger that can be accessed via the Ripple Data API. The API can return JSON objects from which we can extract the data we need.

Of course, to record and display the daily exchange-rates I went straight to Google Sheets. I gathered the relevant XPR data using Google Apps Script’s UrlFetchApp Class and pushed it to my Google Sheet with SpreadsheetApp Class.

Here is a live embed of the XRP Google Sheet that is updated via a daily time trigger via Google Apps Script.