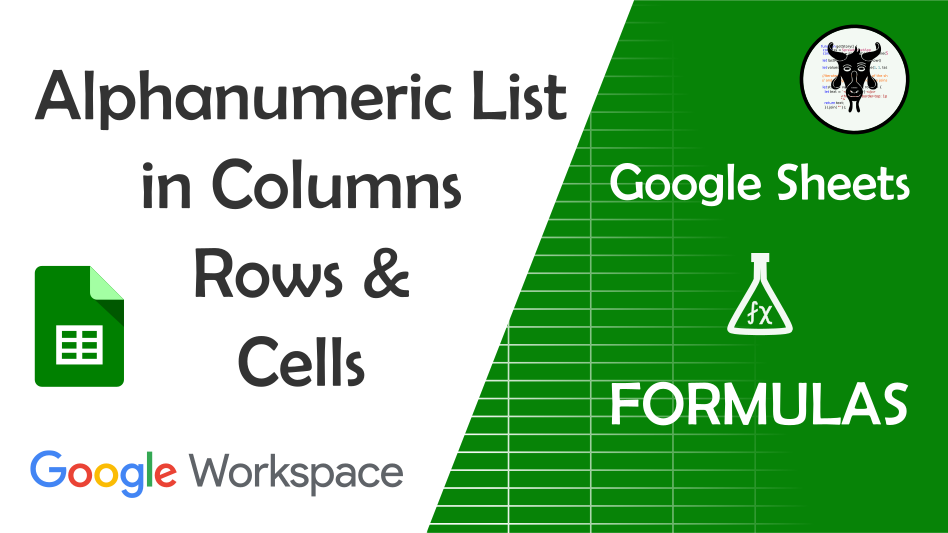 For whatever reason, sometimes we just need a list of alphanumeric letters and numbers like this “0123456789ABCDEFGHIJKLMNOPQRSTUVWXYZ” to run down a column or across a row, or just all packed into one string of text in a cell in our Google Sheet.

In this tutorial, we will cover 4 ways to achieve this. Some approaches have different benefits than others. While two of the approaches even use the new Google Sheets LAMDA function.

If you just want to dive in, copy the formula, and get back into your own project, click on the link to the main numbered headers in the table of contents below. You can copy the formula into your project using the copy symbol in the dropdown menu of the formula bar and selecting the formula you want.

Each formula type can be:

The How it Works sections are not mandatory reading but might be helpful if you plan to extend the formula or are simply curious.

Oh, and number 1 is my favorite.

This approach probably has the smallest visible footprint generating an alphanumeric sequence in Google Sheets. We can convert the standard base 10 (0123456789) to base 36 which makes use of all number characters and all letter characters in the alphabet.

The only downside is that we can’t really add any other character types to the string using the same approach should we want to be more creative.

Get an array of letters and numbers in a sheet. 1
Did you enjoy the tutorial? Want to upskill and get a solid step-by-step course to become a pro at Google Sheets? Check out my course, Google Sheets: Learn the Essentials with Three Detailed Projects. Sign up today.
Want a fast track to boost your Spreadsheet efficiency? Grab one of these handy Google Sheets Shortcuts mousepads that I created from my store.

In this approach, we use the BASE function to generate our alphanumeric list in Google Sheets. This function converts a decimal (1-10) number into a text representation of another base.

But, what is a base?

Base is the number of characters representing a counting system. The most common of which is base 10, a ten-digit counting system also known as the decimal system. After we reach ten in counting in this system, we reuse the numbers to make 11, 12, 13 etc.

Another, base system you might have heard of is the binary system or base 2. This system often represents on/off systems in computing. You know, all those ones and zeroes. 🤖👩‍💻

Likewise, you might recognize a base 16 system when working in your favourite image editor when selecting a hexadecimal colour like sky blue (#87ceeb).

For us, that means we set our base to 36 and our decimal value to a sequence of 36 numbers starting from zero.

We can generate a matrix of numbers in Google Sheets by using the SEQUENCE function. This function takes 4 arguments:

In our example, we will use the SEQUENCE function to generate a list 36 rows deep of numbers starting from zero. These will be used as reference numbers for our BASE function.

Now, BASE on its own will not be able to create a number for each item in the sequence we generate. It will only apply the base to the first item which will be 0.

To force BASE to work on every item in the array we can use the ARRAYFORMULA function. This function converts single-cell processes into one that can be calculated across an array.

This makes the function an incredibly useful tool and you can see more examples of ARRAYFORMULA in action here.

Not my favourite approach, because it feels like you are doing the bulk of the work in the string. However, it is ideal if you want to build a custom string of characters in a set order.

In this example, we already have a predefined list of characters in a string separated by numbers. We might be storing these numbers on a separate workings Google Sheet tab.

Our aim is to split these characters and convert them into items across a row or down a column. We can do this with the SPLIT function.

For us, our text is separated by a period (.), so that will be our delimiter. The result of the split is a row containing a character from the string of text in each cell.

To have characters run down a column, we then need to use the TRANSPOSE function.

I mean, besides the opportunity to play with the new MAP and LAMDA functions, this option is my second favourite. Here we combine two maps to grab the:

We use the CHAR function to extract the character from the standard Unicode table. The benefit here is that we can alter the SEQUENCE start and length to capture other characters in the Unicode table.

Besides sounding like a surfer dude’s expression of enthusiasm, the CHAR function allows us to display any character from the many tens of thousands long list of characters in the Unicode chart.

To iterate through each CHAR set we use the Google Sheets MAP function. This function iterates through each value in a given array and transforms it based on the formulas set inside the LAMBDA function of the MAP.

This leads us to the LAMBDA function. The beauty of this function is that we can create custom functions with a set of named variables. You can even advance this to generate your own named functions in Google Sheets.

The MAP function takes an array set as its first argument. In our example, this is either a sequence of 10 or 26 numbers for the ten digits and alphabet respectively.

Next, we create our LAMBDA function. We first set our custom iterator to ‘cell’ (It can be anything). Then we reference the ‘cell’ variable in our CHAR() function.

This means that each time MAP iterates through the sequence it will set the sequence number to the CHAR() as an argument.

You can see that we have wrapped two maps into curly braces”{}“. In Google Sheets, curly braces allow you to build your own array of cell data. When you separate arrays by a semicolon. “;“, it means that you want to put the next array below the previous one. Likewise, you can use a comma, “,“,  to append an array across a row.

In our first example that generated a column of alphanumeric cell data we used the semicolon separator:

Another use of the LAMBDA function here, this time in conjunction with Google Sheets MAKEARRAY. With MAKEARRAY we can forego the SEQUENCE function because it does the same thing.

Again, like the MAP approach, we can add other characters from the Unicode chart by setting the start index of CHAR and the length and adding it to the array inside curly braces.

The MAKEARRAY function follows the same principles as MAP and SEQUENCE combined. MAKEARRAY allows you to generate a 2d array or matrix based on an iterable formula generated in a LAMBDA function.

We then have the familiar LAMBDA custom function builder.

This time LAMBDA requires us to generate a row and column variable. We set “row_idx” and “col_idx” respectively here.

Finally, we reference our “row_idx” variable inside our CHAR function. It is important to keep in mind that on the first iteration of MAKEARRAY “row_idx” with be equal to one.  So if we want to get, say “A” in position 64 of the Unicode chart then we need to subtract one from the position.

Finally, we wrap our number and letter MAKEARRAY set in our array curly braces.

This is probably my earliest approach to creating an Alphanumeric list in Google Sheets.

Here we are extracting the column and row header ranges and using those to create our alphanumeric list. This means if we ever wanted to continue our lettering to AA, BB, CC etc. we could by extending the COLUMN range.

The downside to this approach is that it is a bit verbose.

To extract a list of numbers, this is more than enough and we can stop at this stage only to include the TO_TEXT() function to format the number as a text to match the letters.

We also need to subtract one from our result to get the number starting from zero and apply ARRAYFORMULA to iterate through each range.:

To extract the column letters we need to go a little further and apply the ADDRESS function.

Next, we can use the REGEXEXTRACT function to extract only the letters from the A1 notation address, converting $A$1 to A.

REGEXEXTRACT takes the text to extract as the first argument and the regular expression used to extract the desired text in the second argument.

We could have set our regular expression to just grab all the capital letters like so, [A-Z]. However, we wanted to futureproof ourselves in case we want to retrieve AA, BB, FFF, GGGGG in the future so added the regular expression plus (+) quantifier that allows you to match one or more occurrences of the preceding element.

Wrapping our ARRAYFORMULA  function around our formula so far, we get a  row or letters in each column. From here we transpose this to run down a column:

That wraps up this tutorial on creating an Alphanumeric list in Google Sheets. So do you think these formulas are useful? How would you apply them to your own projects? I would love to hear in the comments below.

If you have an alternate solution to this problem I would also love to add it to the list. I’ll even give you a special shout-out for being so awesome.

In the next tutorial, we will make a password generator Named Function in Google Sheets. Make sure you subscribe to get a notification for when this tutorial will come out.