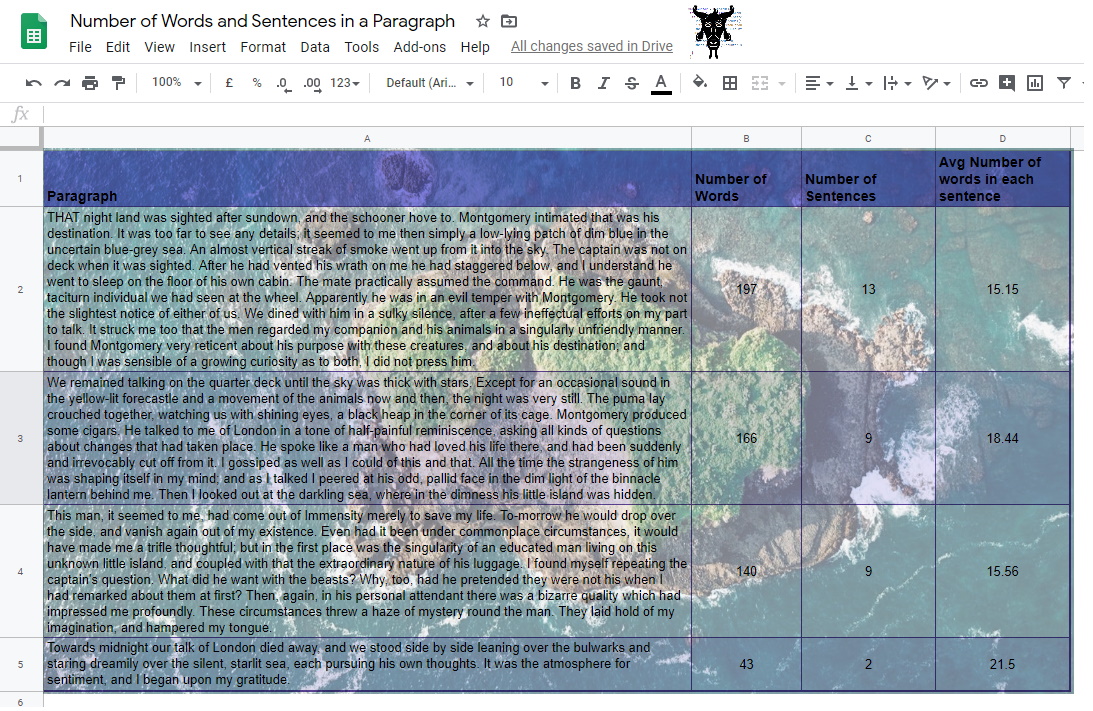 Have you ever woken up in the middle of the night thinking – phawh! I’d really like to know how many words there are in a paragraph – Or stopped mid-chew on some arbitrary item carelessly left in the paddock by the boss and thought – geez! If there was only a way to count the number of sentences in a paragraph in a cell in Google Sheets!?

Well, you’re a bit weird, but I guess you are in the right place.

We’ll give you the formulas for you to jump off on your own project straight away. We’ll also give you a detailed explanation of the formulas so you can figure out how it all works using our example.

Navigate through the table of contents to get to what you need or read on!

In our example, we have a set of 4 paragraphs that we want to review: 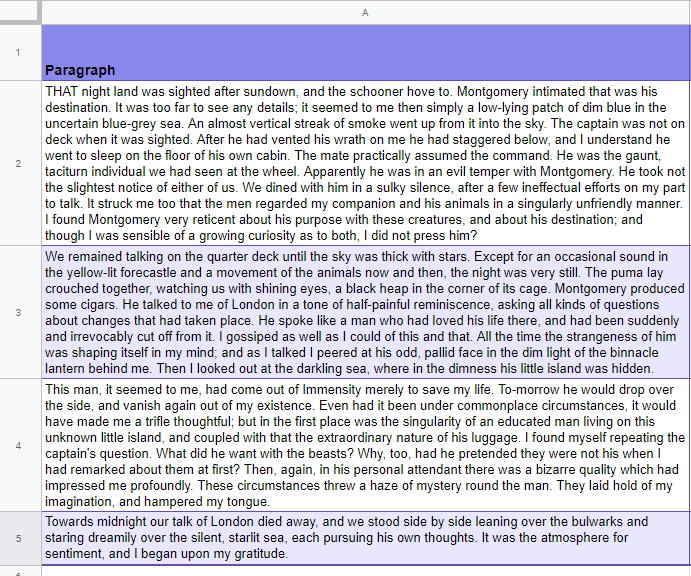 We will want to extract the word count and the total number of sentences for each cell in column A. Then, we want to get the average word count for each sentence in each paragraph.

The cell is the location of the paragraph. So in our example, our first cell with a paragraph is in A2. So our formula would look like this: 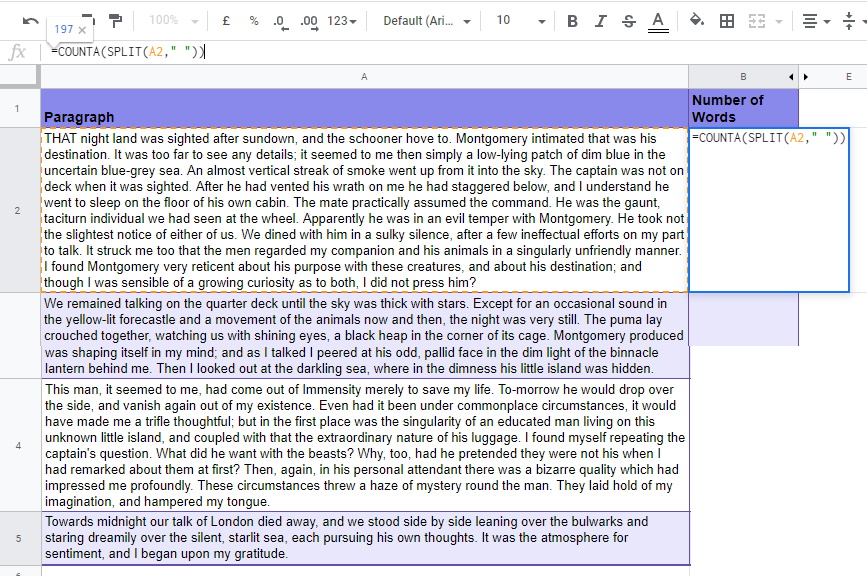 Usually, the best way to look at a Google Sheet formula set is to start from the middle and work our way out.

In the text argument, you can either add the text directly to the SPLIT function or reference the text in a cell, like in our example (A2).

The delimiter, arguments is the character or characters you want to use to split the text by.

Take a look at a simple example. Let’s say I have a cell A1 that contains the text:

We can split out each word into its own cell by using an empty space in the delimiter argument. We do this by putting a space between two quotation marks, ” “.

Let’s see how this looks in Google Sheets:

And here are the results:

You can see now that each word is separated into its own cell. All we need to do now is count how many words there are in each cell.

COUNTA counts all the values in a set of data including text.

Let’s see how COUNTA works on its own. In cell A2, we will enter COUNTA and then select the range of the newly split words.

So all we have to do is join our SPLIT and COUNTA into one formula:

In our example, the cell reference would be A2. It would look like this: 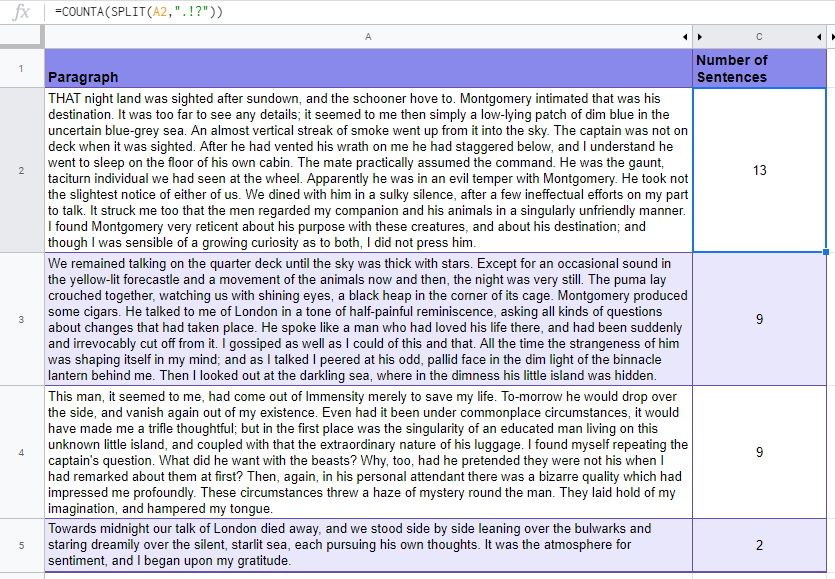 We know that a sentence can conclude with a full stop (period) (.), question mark (?) or an exclamation mark (!).  In our delimiter argument, we added each sentence marker consecutively like this, “.!?”.

This way, the SPLIT function will check for each character “.”, “!” and “?” independently and spilt the text if it finds any of these. This is how SPLIT would look in our simple example:

You can easily see here, we are going to get a count of 3 out of this when we add our COUNTA:

There are two approaches here depending on your needs:

In our example, the reference would look like this: 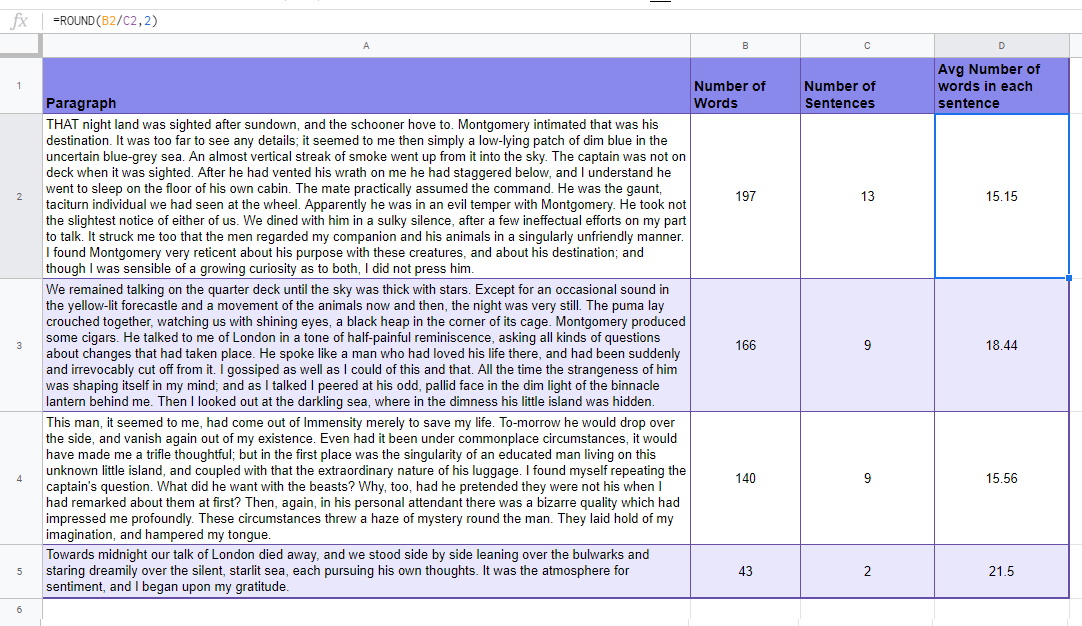 And in our example: 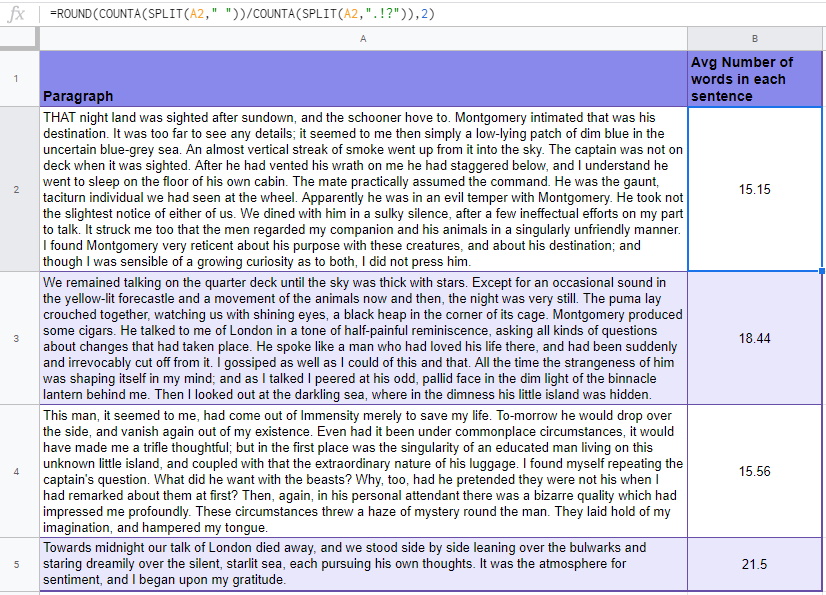 In our little example, it would look like this: 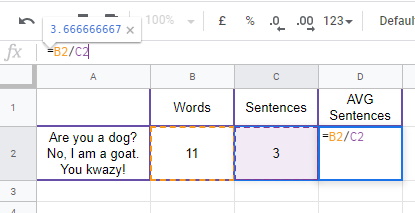 We don’t have to see all those extra decimals we only want to see them to two decimal places. ROUND to the rescue.

ROUND take one primary argument, a number or a cell reference to a number. If left on its own, ROUND will round up or down to the nearest whole number. However, we can add an optional argument to determine how many decimal places ROUND should round to.

Wrap ROUND around our average formula. It should now look like this:

In our little example it would look like this: 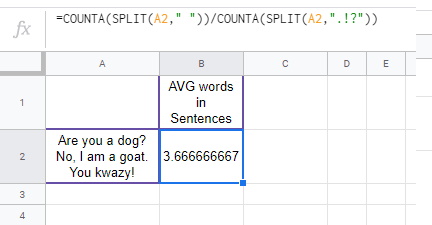 Then we can wrap our ROUND function around this: 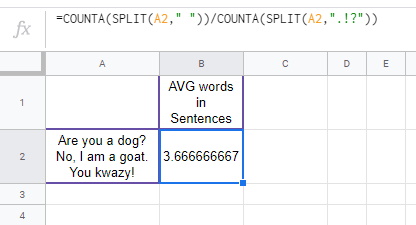 Done! You have just created a delightful franken-formula.

So, what have we used this for?

Well, it has been useful when getting the word count and paragraph count for student paragraph assignments. It also has come in handy for web scraping when trying to find endpoints or end of DIVs.

What will use this code on? I would love to hear in the comments below.

Here is a link to the example Google Sheet. Simply got to File >> Make a copy so that you have your very own version to play around with:

Number of  Words or Sentences in a Cell

Did you enjoy the tutorial? Want to upskill and get a solid step-by-step course to become a pro at Google Sheets? Check out my course, Google Sheets: Learn the Essentials with Three Detailed Projects. Sign up today.
Want a fast track to boost your Spreadsheet efficiency? Grab one of these handy Google Sheets Shortcuts mousepads that I created from my store.

One thought on “Google Sheets: Get the Number of Words or Sentences in a Cell (Paragraph)”