One of the weekly tasks in my day job as an academic administrator is to look at a number of ‘modules’ or courses that our college is running and complete some analysis and crosschecking. Each week the students complete a ‘unit’. However, during some quarters, not all modules are doing the same unit. Before I can run my code I need to determine what modules are running and what units we are up to for me to run my automated code.

To do this I created a dialogue box when the code is run from the add-on bar. In a few clicks, I can then choose the relevant modules and units and then run the selected code.

Let’s take a look at what the dialogue box looks like: 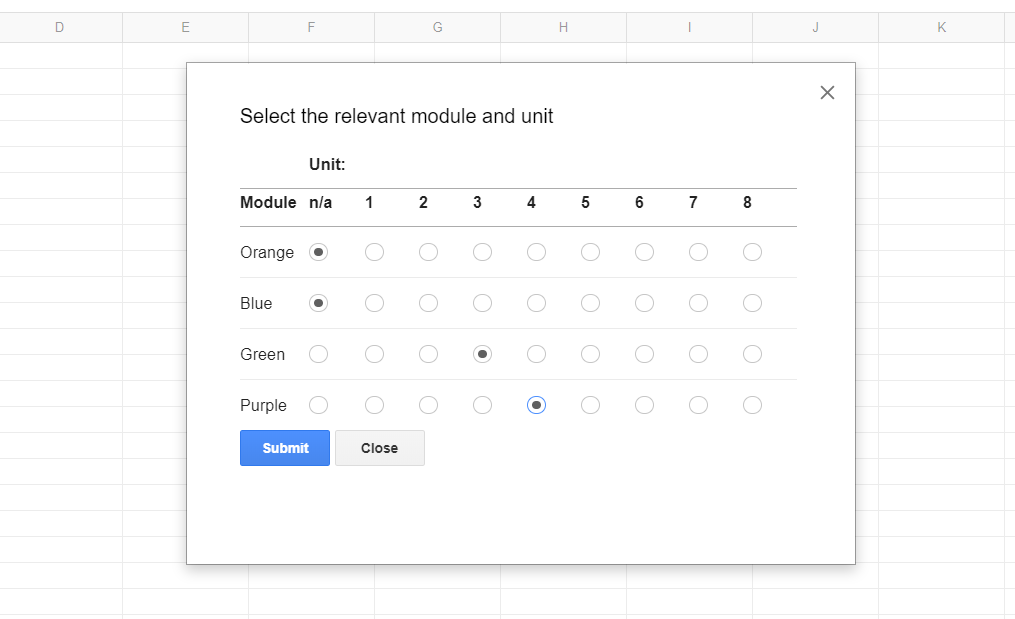 Upon “Submit”, the dialogue box returns an array of objects of checked values from the radio buttons that can be used in the server-side Google Apps Script.

In this tutorial we will look at the following :

Look at whatever portion of this tutorial you need to help you in your own project.

Creating Menu Items and Sub-Items in the Add-ons Dropdown.

Our first task is to create a convenient way to access my automation program. At a later date, I might want to make this into an Add-on for my company to use so I am going to put the access button in the Add-ons drop-down menu. I might also have some other executions running to analyse my data so I am going to put this program in a sub-menu called “Admin”.

(Note Add-ons has been updated to Extensions)

Here is how it will look:

We’re just going to call this program, “Test”, because it is not the whole program we will be running.

Let’s look at the code.

First up we need to get the User Interface (UI) class so we can work inside the Google Sheets UI on line 3 with SpreadsheetApp.getUi();.

Now we’ll call a special Google Apps Script function called a trigger that will run when the spreadsheet or documents open (onOpen).

Next, the UI class is called again on line 8 and we set up the menu with ui.createAddonMenu() inside this method we can either add an item link directly or we can add a sub-menu. For this tutorial, we’ll create a sub-menu of “Admin” (Line 9) just in case we want to create more automation codes at a later date.  You’ll probably note that “Admin” is not the main menu category, it “Dialog” this is actually the name of the project: 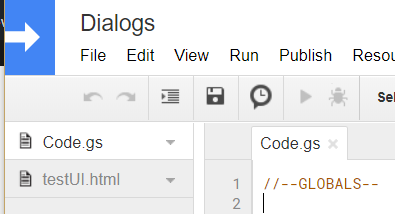 Inside this sub-menu we will add an item with the addItem(title, function name) method. This method takes two arguments, the title, in our case, “Test”, and the function name the menu will lead to, in our case “test”.

Once the menu has been set up, it needs to be added to the UI, line 11.

Now when we go into Add-ons>Dialogs>Admin>Test, it will run the test() function.
TOP

Setting Up A Custom Dialog Box

Setting up a custom dialogue box in Google Apps Script is really simple. First, you need to decide what type of dialogue you need. There are two types of custom dialogues:

We don’t want the user to do anything with the Sheet when the dialogue is up so we will choose option one.

Let’s take a look at the code:

Before we can call the showModalDialog() method, we need to get the HTML document that we put all our HTML, CSS and client-side Javascript that we are going to use to display what will be inside our dialogue box. We’ll also need to create the testUI.html file, but we will talk about this later.

To set up the HTML for our dialogue we call the HtmlService class and create what we want to display from the file “testUI”  with  createHtmlOutputFromFile(file name) on line 16. The method can also take a width and a height. In our case, I have set the width to 450 pixels and the height to 300 pixels.

Next, let’s create the testUI.html file that will be displayed in the dialogue box.
TOP

Preparing a HTML file to set inside the Dialog Box

As you can see, the sheet is styled pretty neatly. To save time, I just went with Google’s recommended CSS stylesheet. This stylesheet also has some custom classes for you to modify things like buttons – you can see that I added it to line 5 below.  You can also add some custom CSS if you wish to do some more tweaking to the layout of your UI.

Let’s quickly take a look at the HTML side of the code. I’ve kept it fairly simple without any looping with jquery so it’s easier to read.

NOTE:  You can see that I did not create a <form>. Forms will prompt a new page and cause problems with collecting the data from the page upon submission.

After setting the table on line 10, we dive into creating custom column widths to tidy things up.  This is, of course, is optional.

Line 22 creates the First header for the table and then line 25-34 creates the second level headers. The Google CSS creates an underline for the header which looks quite nice.

You can then see the 4 blocks of modules with their radio buttons. Be sure to set the name value for each line of radio buttons to the same so you can determine the checked ones. As you can see I named each radio input for each module the same as the colour of the module.

Finally down on line 85 we create the “submit” input that, when clicked, will run the form_data() function. I added the class “action” to simply provide the blue colour to the button using the Google custom CSS.

Line 86 then adds the “Close” button. Google Apps Script has a custom close method google.script.host.close() that closes the dialogue box and stops the program from continuing to run.

Note! I created a function called “CloseIt()” to do the same thing you could just as easily replace this with the “CloseIt()” function, but I wanted you to see that you could use google.script.host.close() right in the input.
TOP

Getting the data from the Dialog Box and Sending it Server-side.

When the ‘submit’ button is clicked (Line 85 testUI.html) it calls the form_data() function. This function grabs all the checked results from the radio buttons for each module and puts them in an object array to be pushed to the server-side function runsies() in code.gs and then closes the dialogue box.

Let’s take a look at the Javascript code in the testUi.html file:

First, we import jQuery using Google’s API link on line 89-90. Then we dive into the form_data() funciton.

First, we create the values variable to store the 4 object keys, Orange, Blue, Green and Purple to represent each module. We use jQuery to find the ‘value’ identifier that was check, val() , of each input by their ‘name’ identifier in the HTML. 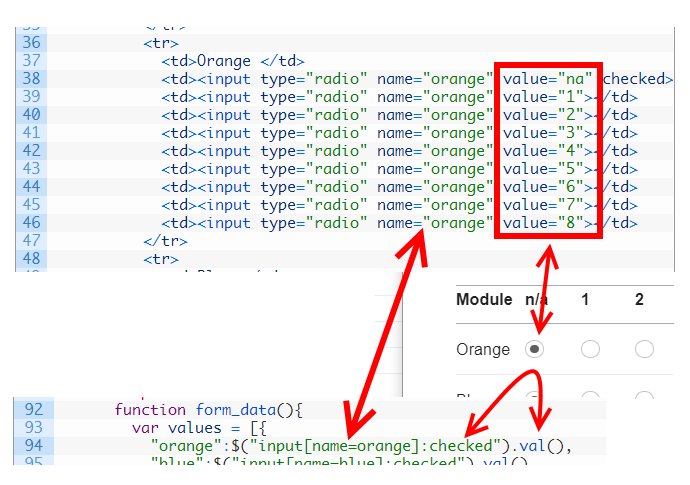 Once the array is ready, we call the  google.script.run.withSuccessHandler().runsies(values); on line 99. This is a callback function that is better read from right to left. When this script is run it sends the values to the runsies() function in code.gs server-side.

We then run a closeIt() function to close the dialog box.

Another example of how to use these callback functions can be found here:

Finally, going back to the code.gs script, we see that the function runsies() simply logs the array. Of course, we can do much more with this data once we have it server-side, but that is for another time.

Reviewing the log data <Crtl>+<Enter> we can see that the array is now server-side (Old IDE). 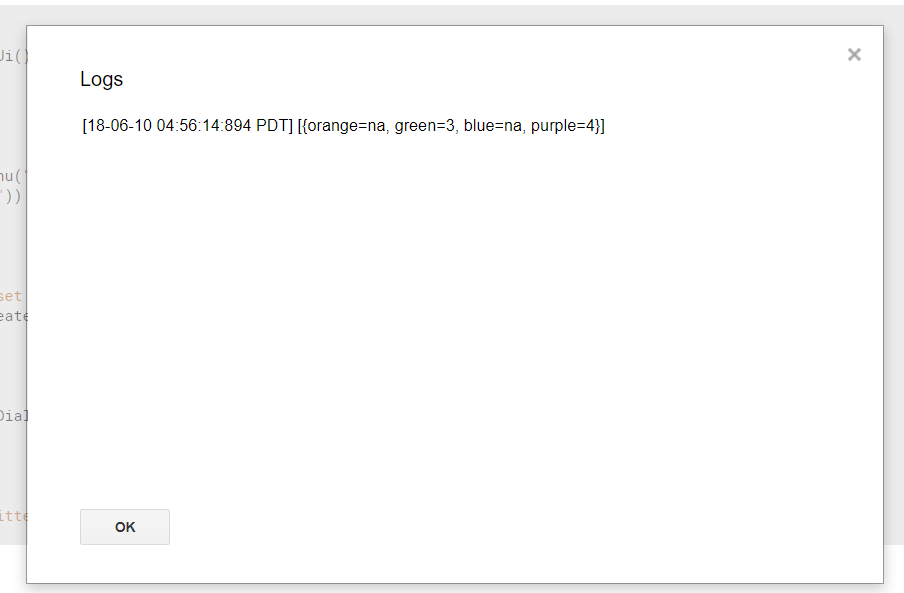 UPDATE 16 Jan 2021 – NEW IDE – With the new IDE (Apps Script editor) the log will not report the results after the execution of a script from Google Sheets, nor will the shortcut “ctrl + enter” work to reveal the log.

You will need to go to the editor’s sidebar and select “Executions” then select Runsies from the menu. You should then see the logged results.

An alternative to the Logger.log(values) in the runsies() function might me to replace it with the code below so you know it is working:

That’s it! All done! In this tutorial, you have looked at how to create a custom dialogue for Google Sheets using Google Apps Script, grab the results and prepare them for server-side use. If you want to hone your skills try and add some other HTML inputs to the values array. Alternatively, you could see how you might make use of the server-side array data in the Code.gs file.  Let me know what you come up with.